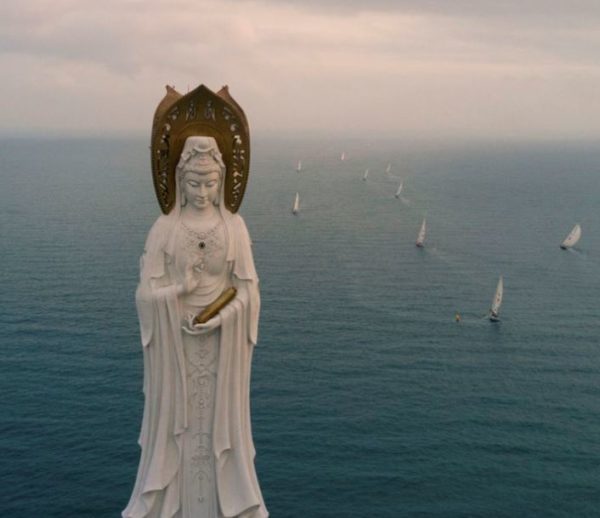 Leg 5, consisting of two individual races, has been particularly challenging for the Clipper fleets. Commencing on 29th January, 2018, the fleet began heading north from the Whitsundays towards the South China Sea, setting course for the golden sands of Sanya. From there the weather turned colder and thermals were added to their layers of clothing as they routed east into the East China Sea towards the finish line in the Olympic sailing city of Qingdao.

Anticipation built during Race 7, as the distance separating the top two teams from the chasing pack narrowed upon arrival into port in Sanya. Fleets were nervously looking over their shoulders as competition heated up and weather forecasts developed. No one’s position could be assured and high levels of concentration were needed, as every tweak could affect the boat speed.

PSP Logistics snuck into the lead and stole victory, as daring tactics didn’t pay off for previous race leader, Qingdao, who failed to capitalise on being in Stealth mode and fell into a wind hole.

While Qingdao were the second team to officially cross the finish line, they were truly disappointed to be bumped to third place in the overall standings as Dare to Lead was awarded a redress for time spent going to the assistance of Liverpool 2018, giving spare parts early on in the race.

Race 8 kicked off to an uneasy start as PSP Logistics briefly got caught up in 10-mile long fishing net – not uncommon in those waters which are home to high numbers of fishing vessels. All skippers had to stay particularly vigilant of the hazards brought by sailing through and alongside the largest fishing fleet in the world, and came up with avoidance methods to stay out of their way wherever possible.

Competitors were once again reminded that the race is not over until they have crossed the finish line. PSP Logistics, who had led for eight consecutive days and was heading for a second successive race victory, succumbed to a wind hole just 30 nautical miles from the finish line in Qingdao, allowing Visit Seattle to sneak up along their eastern side and steal a dramatic win!

Again, Healix has been on hand to provide medical assistance to crews once in port. On a daily basis, our assistance coordinators check the positions of the eleven fleets on the Clipper Race Viewer. Once the teams are estimated to be within around 12 hours of arrival in any major port, everything moves very quickly behind the scenes here at Healix. Any competitors taken ill only have a limited time to seek medical attention, and may have been in need of treatment for weeks since they were last in port.

We use reports provided by our Global Provider Network team to arrange appointments with specialists at our approved centres of excellence in each port destination. On the day of appointment or admission, Healix will contact the treating Doctor to obtain a medical update, which then gets reviewed by the Healix Medical Team. While a case remains open, Healix keep the crew member, Clipper and the insurer informed, while arranging all ongoing treatment, transport and settling any medical bills. A final ‘fit-to-sail’ decision gets made by Clipper race directors based on our expert opinion.

The full Clipper Race fleet will be berthed at the Wanda Yacht Club, Qingdao, until Friday 23rd March, when the eleven teams will embark on the Mighty Pacific Leg 6, a 5,600 nautical mile race across the North Pacific to Seattle.