After almost a month at sea, all the yachts have crossed the finish line of the Mighty Pacific Leg. We recap over the last 5,600 nautical miles of the Clipper 2017-18 Race, as the crews prepare for the next leg of their journey around the world. 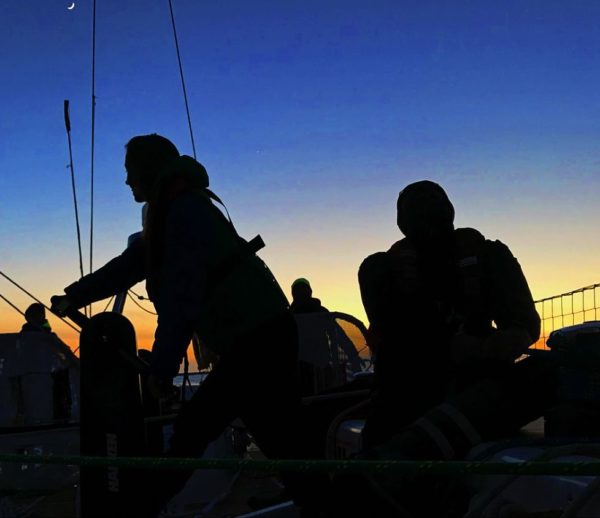 Leg 6 “The Mighty Pacific Leg” has been a month-long 5,600 nautical mile marathon race across the world’s vastest ocean. The Clipper fleet has done what very few have dared to before, and have fought a tactical battle against the cold, wet and exhausting conditions.

The race took off to a slow start departing from the east coast of China. Teams played cat and mouse the entire first week of the race, working their boats to the maximum as they struggled to dodge wind holes, fishing fleets and thick weeds in their attempts to make it out to the open ocean where stronger, more reliable winds were promised. The passing of Gate Haller on Day 10 was a milestone moment, signifying a window of opportunity to make bigger and bolder decisions as the fleet finally reached the Pacific.

Over the following days, the fleet split into three groups as the sea slowly started to build and we saw a thrilling match towards the scoring gate, which was the next waypoint along the route. Sanya Serenity Coast, Qingdao and Unicef gave everything in the aim of securing extra bonus points and it was almost too close to call! After a terrific and powerful downhill run, Sanya Serenity Coast edged Qingdao by a marginal 33 seconds.

Once through the scoring gate, the teams saw a brief moment of excellent racing conditions, riding on wind gusts of 30-40 knots. All too soon, they were hit by some of the toughest conditions faced in the 2017-18 edition of the race to date .The crews handled hurricane force winds and a phenomenal sea state exceptionally, taking on waves greater than 14 meters high.

As the seas settled, teams relished returning to full race mode entering the final stretch towards Seattle. Qingdao managed to hold off chasing teams Sanya Serenity Coast and Unicef as they rounded the final waypoint.

Bold tactics were played by Sanya Serenity Coast as they opted to go into Stealth Mode, taking them off the grid for 48 hours to make the most of the fast downwind sailing. 4 other yachts soon followed suit and also went off the radar, adding to the excitement and pressure on fellow competitors, not knowing where they will turn up next!

Once out of Stealth Mode, it was revealed that Qingdao continued to hold their lead on the rest of the fleet closely followed by Sanya Serenity Coast and Unicef, all fighting for podium positions. We saw a nerve-wracking finish as Qingdao claimed its first win of the Clipper 2017-18 Race. As the rest of the fleet sailed in to port, they were greeted with a hero’s welcome in Seattle.

Over the duration of Leg 6, Healix have responded to a small number of requests for assistance at the main port of arrival, thankfully mostly only for minor medical problems.

Leg 7, the USA Coast-to-Coast Leg, starts today, Sunday 29th April as the teams head back out to the vast Pacific Ocean. Straight away they will have to make the critical decision of taking either the inshore or offshore route, both equally as unpredictable. From there, they will be heading around to Panama City, on to the crystal clear seas of the Caribbean, crossing the finish line in New York.