Home > Clipper 2017-18 Update: the winner for the first leg announced

After a spectacularly close finish, the winner for the Atlantic Trade Winds Leg is announced. We recap over the first 36 days of the Clipper 2017-18 race, as the fleets head south east into the South Atlantic marking the start of Leg 2. 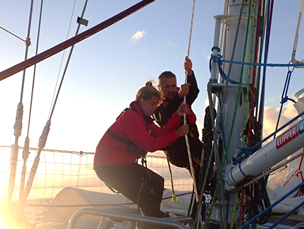 Leg 1, the Atlantic Trade Winds Leg, was the first of thirteen races that make up the Clipper Race 2017-18. For those that have been following the Clipper news feed and route viewer, it was a race of many twists and made for some tense viewing.

Early on, the Greenings team had to take a major diversion off-route to address an on board medical emergency only days into the race, causing them a huge 58hr 44min 51sec set back. Surgical medical attention was required, and the crew were forced to sail with a man down until a replacement member was able to be on-boarded.

Following the diversion, the Greenings crew made up significant ground on the rest of the fleet during the remainder of the race through sheer determination. Geographically, for a large proportion of the race NASDAQ remained very close to Greenings, but sadly fell behind as they too had to divert for a crew member to disembark on medical grounds.

Healix remained on-hand throughout, organising two medevacs and medical treatment and was in constant liaison with race directors to provide updates on all cases.

The Greenings team were delighted to take first place for the first leg after 35 long days of racing. Although they may have not been first to cross the finish line, a re-dress was applied for the re-routing, and bonus points awarded for the quickest completion of the Elliot Brown Ocean Sprint.
NASDAQ were the twelfth and final Clipper race team to cross the finish line, and completed the longest ever individual race, finishing 36 days after setting off in Liverpool.

We are glad to report that all twelve teams arrived safely in Punta del Este, where they were welcomed with a typical Uruguayan BBQ, a live Tango singer and orchestra after a spectacularly close finish.

After a few days stopover to see family and perform maintenance on the boats, they’re off again. Getting straight back to the challenge, the crews set off yesterday on Leg 2, the South Atlantic Leg. After leaving the South American coastline behind, crews began the 3,560 nautical mile crossing to Cape Town, South Africa.  We predict more nail-biting viewing over the next 18 days, as the crews battle rolling swells and storms like they have never seen before.