Suspected cases of anthrax have recently been reported in the Thika region of Kenya. Eight abattoir workers were admitted to hospital with symptoms suggestive of the disease, but have subsequently been discharged following treatment. 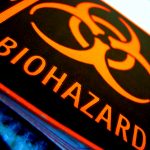 Anthrax is caused by the spores of the bacterium Bacillus anthracis and most commonly causes a skin infection – which seems to have been the situation with the recent Kenyan cases. This is the mildest form of the disease and is usually easily treated with a course of antibiotics. If the spores are eaten or inhaled, however, the outlook can be particularly grave: without treatment the mortality rate can be as high as 60% to 90%.

Anthrax was last widely reported following the infection of 100 people in the summer of last year when particularly high temperatures in the Siberian tundra thawed long-frozen reindeer that were infected with anthrax spores. The local human inhabitants became infected following anthrax being transmitted to the living reindeer population, which is an important source of food – 2,300 reindeer died of anthrax during that epidemic, and another 100,000 were culled. The ability of anthrax spores to survive in challenging climates, for many decades, has led to some dubbing the bacteria as almost indestructible.