Home > How safe is it to visit Cambodia? 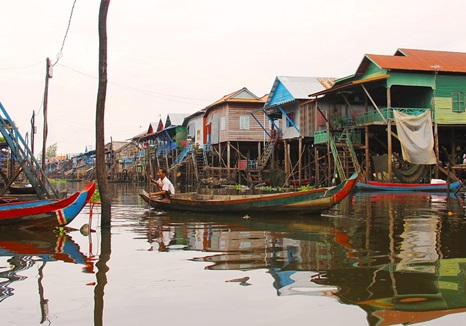 Overall, we consider Cambodia to be a moderate-risk country, owing to a range of different security-related factors. Geographically, the security risk is higher in more rural areas of the country where landmine clearance projects continue to take place, and large volumes of explosive ordinance remains undiscovered. Most travellers will be visiting Phnom Penh or Battambang for business purposes, while the majority of tourists will be heading to Siem Reap, Sihanoukville or Kampong.

It is generally safe to visit Cambodia, especially when sticking to major urban centres and, when I visited in March this year, I encountered no notable security threats. The political climate of the country is somewhat volatile ahead of the upcoming general election and, as civil unrest is expected to proliferate, it is highly recommended that itinerary-specific advice is sought before travel in the coming months.

Levels of crime in Cambodia continue to be high, although this is mostly opportunistic and petty. Bag snatching and pickpocketing remain the most prevalent form of crime and pose the biggest risks to travellers, especially in busier areas including tourist hot spots, marketplaces and transport hubs. Violent crime does take place and, owing to the prevalence of gun ownership (both licit and illicit), armed robberies occur frequently. There have also been incidents of guns being used to threaten foreign travellers owing to perceived rudeness or cultural insensitivity, although the actual use of weapons against travellers remains rare. Drink spiking is another risk that faces travellers, particularly in Sihanoukville, which can precede sexual assaults or robbery.

Cambodia currently has a heightened risk of politically-motivated civil unrest owing to the upcoming general election set to be held on 29th July 2018. The main opposition party, the Cambodian National Rescue Party (CNRP), was officially disbanded by the Supreme Court in November 2017 and over 100 of the party’s leaders were imprisoned and banned from participation in political elections for the next five years. This move reflects the lack of independence of the country’s judiciary and has motivated some protests against the ruling. The country’s security forces have a history of responding violently to demonstrations against Prime Minister Hun Sen and these are likely to increase in the coming months. While these demonstrations do not pose a direct risk to foreign travellers, the use of live ammunition and tough crowd control measures pose a significant incidental exposure risk to those who find themselves nearby.

Cambodia is one of the world’s most disaster-prone countries in the world. The most fatal disaster type is flooding, which routinely causes widespread fatalities during the annual flood season that runs from July to October. The risk is highest in areas that are located in close proximity to the Mekong Delta, with areas around the Tonle Sap (Great Lake) also experiencing flooding regularly. Cyclones pose the second largest geographical risk in the country and, although they do not often make landfall, they do contribute to the already heightened risk of flooding.

Earthquakes are uncommon and there is no record of a significant earthquake-related disaster. However, there is a low risk of a tsunami occurring on Cambodia’s southern coast, which could be caused by either an offshore earthquake or an undersea landslide. This risk is lowered owing to the natural protection offered to the country by the Gulf of Thailand to the south, Vietnam to the east and Malaysia to the south-east.

Corruption is widespread at all levels, from everyday interactions with medical professionals and traffic police to judicial and government institutions. There have been examples in the past of law enforcement agencies, such as the anti-human trafficking unit, accepting bribes to arrest innocent people or business competitors. The risk of travellers encountering corruption is highest for business travellers looking to start operations in the country, with the majority of foreign businesses in the country reporting being asked to make ‘unofficial facilitation payments’ to set up businesses, including seeking construction permits or setting up utilities. From a more day-to-day perspective, the local police may ask for cash payments for very minor crimes they allege you have committed. This is not as overt as it once was and I did not experience this during my time in the country.

Avoid pedestrian travel during hours of darkness: the risk of crime is increased significantly during darkness, as criminals are less likely to be identified and apprehended. The local police are more likely to ask for bribes outside of daylight hours, although not exclusively. Using a trusted local driver will mitigate this risk, and you are less likely to stand out as a foreign traveller when inside a vehicle. We recommend using a local driver over using local taxis owing to the prevalence of taxi scams targeting foreign travellers. If travel using taxis is required, you should ask your hotel to order official taxis as needed.

Monitor local media and our Travel Oracle alerts before and during your trip: this will enable you to be alerted to periods of heightened tension, planned protests and any incidents of violent unrest ongoing while you are in-country. The Phnom Penh Post is also a reliable English-language resource for staying up to date with national news. Knowing where protests are occurring will allow you to plan your journeys to avoid these, and can also allow you to choose your hotel more strategically to minimise your risk exposure.

Seek itinerary specific advice: letting your security provider know the details of your trip will enable us to advise you of temporary security concerns that are out of place for the risk environment and not covered in our static content elsewhere. This includes anniversaries that make it more likely that protests will occur or specific assessments of whether the location you plan to visit is at a heightened risk of flooding during your trip. Your profile as a traveller is also very important in determining your vulnerability in a security environment, and sharing some basic details about your profile will enable us to give you bespoke advice to your circumstance.

Employers should ensure that they have a detailed understanding of Cambodia’s operating environment and account for the likelihood of staff encountering corruption. Anti-bribery policies should be shared with staff before they travel and should be attached to practical advice on what employees should do if an attempt to solicit a bribe is made. Moreover, employers should ensure that the political climate of Cambodia is monitored more closely in the run-up to the July general election and that none of the trips being made by employees are likely to have strong political associations. If in doubt, you should contact your security provider for advice on the nature of the trip, and Healix will be able to give an informed assessment.

Employees are responsible for ensuring that they are familiar with their companies’ travel policies, including on anti-bribery before their trip, and that they are operating within these guidelines. They should adhere to security advice given to them and should ask for an up-to-date briefing on security risks before they travel to the country. Maintaining communication with their employer and security provider during the trip is essential, as this will enable them to mitigate many of the security risks posed to them, and enable assistance to be given quickly if required.

What are the health risks in Cambodia?

As with many countries in the region, Cambodia can prove to be a relatively healthy destination as long as a few basic precautions are taken. Before you go, it is important to seek advice from a travel medicine expert regarding which vaccinations are required: hepatitis A and tetanus booster are particularly important, along with typhoid and diphtheria vaccinations – although others may be appropriate depending on your itinerary. Malaria is a particular risk in certain areas of Cambodia, so antimalarials medication may be required. Lastly, if you take regular medication, it is particularly important to ensure that you pack an adequate supply that will last the length of your trip.

When you arrive, mosquito bite prevention is important whether you are in an area at risk of malaria or not. Diseases such as dengue, chikungunya and Zika are also carried by mosquitos and can be avoided by using DEET-containing insect repellent sprays, wearing appropriate clothes, and using air-conditioning or bed-nets when inside. These illnesses cause a very unpleasant flu-like illness at the very least and should be avoided at all costs. Water and food precautions are certainly important in Cambodia so that the risk of gastro-intestinal diseases is reduced. Only bottled water should be used (even when brushing-teeth) and street-food should be avoided in favour of food cooked in reputable restaurants and hotels. If buying fruit and vegetables at market, they should be washed and peeled before eating raw – but preferably cooked if appropriate.

In the unlikely event of a serious medical event occurring, the healthcare services in Cambodia are usually only appropriate for the condition’s initial stabilisation. Any specialist treatment is often carried out in Bangkok, Thailand; a short flight away. Close early contact with your health insurer is essential.