Papua has a measles epidemic at present: 800 children are said to have fallen ill, resulting in around 100 deaths. Local reports suggest that 12,000 children are being vaccinated in an attempt to curb this infection caused by the measles virus. 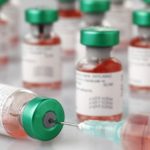 In the West, it is easy to forget the global devastation that occurred annually before the use of the measles vaccine in the 1960s. Up to 100 million people were infected each year around the globe, which resulted in more than 2 million deaths and many thousands of cases of blindness. In fact, measles was so contagious that an estimated 95% of all children were said to be infected with the virus before their 15th birthday. Measles is one of the most infectious agents that cause human disease.

The WHO report that following their global campaign to increase the uptake of measles immunisation, there has been a 79% reduction in the worldwide death rate from this disease since the start of the century. Despite this, there are still occasional outbreaks in the US and European countries as some parents have unfounded fears concerning the vaccine and fail to immunise their children. If the herd-immunity should drop to less than 93%, many fear that a widespread measles epidemic could be re-established. A look into the history books will show us why this is to be avoided at all costs.

Register to receive our risk forecasts 2021

Register to be the first to receive our 2021 forecasts of medical and security risks around the world.

We use cookies on our site to give you the best possible online experience and for analytics and metrics. If you’re happy to receive cookies from us simply carry on using our site. Alternatively, to find out how to change your cookie settings view our cookie policy.