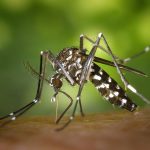 Mosquito borne illnesses are not often seen in Europe as the relatively cold climate is generally unattractive to mosquitos. The Aedes mosquito (responsible for the transmission of dengue, chikungunya, yellow fever and the Zika virus) has a variant that is said to be adapting to the chillier weather, however. This species is Aedes albopictus, the strikingly striped variant earning its common name of the tiger mosquito, which can now be found in the more southern countries of Europe during summer months.

As travellers return home following trips abroad, some will be harbouring viruses caught whilst on holiday. If a traveller infected with chikungunya, for example, returns home to a region infested with the Aedes albopictus, and is then bitten by these local mosquitos, then the mosquitos themselves can also become infected with chikungunya and able to spread the disease to fellow countrymen. This is called autochthonous transmission, and is what has occurred both in France and Italy this summer. There have been 13 cases of chikungunya reported in the Provence-Alpes-Côte d’Azur region of France and 14 from Italy – 6 patients from Rome and 8 from the coastal area of Anzio.

This is not the first time that chikungunya has been demonstrated in Southern Europe, but this painful illness does not have a long history in the region. First identified in Europe in 2007 from the Emilia Romagna region of Northeast Italy, chikungunya was also found in the French city of Montpellier in 2014. Whether the increase in cases is due to more frequent international travel, improved detection, or the much-cited global warming, is unclear at present. What is less uncertain perhaps is that if chikungunya can be spread locally in Southern Europe, it is only a matter of time before Zika comes to Northern shores, as was seen in Florida last year.

As there have been other recurrences of mosquito-borne illnesses in other parts of Europe this year, there may be a common cause. Whether the three recent cases of malaria in Cyprus were also related to an increasingly permissive climate for mosquitos remains to be seen. The WHO declared Cyprus malaria-free in 1967. Makes you wonder.

A Healix Bite Prevention eLearning Course is also available to inform and protect staff working abroad, please contact us for details at enquiries@healix.com.