Heading into 2020 and reflecting on 2019, our analysts examine the key drivers behind the changes to our risk ratings for each region of the world.

The changes in this year’s Africa mapping are largely driven by the expansion of militancy in the Sahel region, especially in Burkina Faso. Healix raised the countrywide Security Risk Rating for Burkina Faso to HIGH due to the spread of militancy into eastern and south-western regions. A number of overlapping militant groups are increasingly active across the country and the wider region, with a combination of Jama’at Nasr al-Islam wal Muslimin (JNIM), Ansarul Islam, Islamic State in the Greater Sahara (ISGS) and Al-Qaeda in the Islamic Maghreb (AQIM) involved in the planning and execution of attacks. This militancy has also impacted the border regions of neighbouring countries. In June, we raised the risk ratings for Benin and Togo’s northern border areas following the kidnapping of two French tourists in Benin’s Pendjani national park by Islamist militants operating across the border from Burkina Faso. This incident was indicative of the capacity and intent of militant groups to expand their operations into previously unaffected countries. Elsewhere in the Sahel region, farmer/herder conflicts have intensified, driven by population expansion and a reduction in the area of productive land. In September, we raised our risk rating in Chad’s border regions with Sudan and Central African Republic to HIGH due to inter-communal violence, which was intensified by the cross-border flow of weaponry from neighbouring conflict zones.

The changes in this year’s MENA map mainly reflect the increase in operational tempo displayed by the Houthi rebel group in Yemen, which has affected the southern provinces of Asir, Jizan and Najran in Saudi Arabia. We have raised our risk rating to HIGH for each of these three provinces, whereas we previously only had a HIGH risk rating for areas 20km (32 miles) from the Yemen border. The group is likely to continue firing unmanned aerial vehicles (UAVs) and long-range ballistic missiles at a range of civilian and military targets within Asir, Jizan and Najran. We are closely monitoring for a deterioration in urban centres in Algeria, which owing to the large-scale protest movement remaining largely peaceful, has maintained a MODERATE risk rating. We are also closely monitoring for improvement in Syria’s risk environment as Bashar Al-Assad has gradually re-captured the majority of the country from rebel and jihadist groups.

Click to view the Healix Medical and Security Risk Map 2020 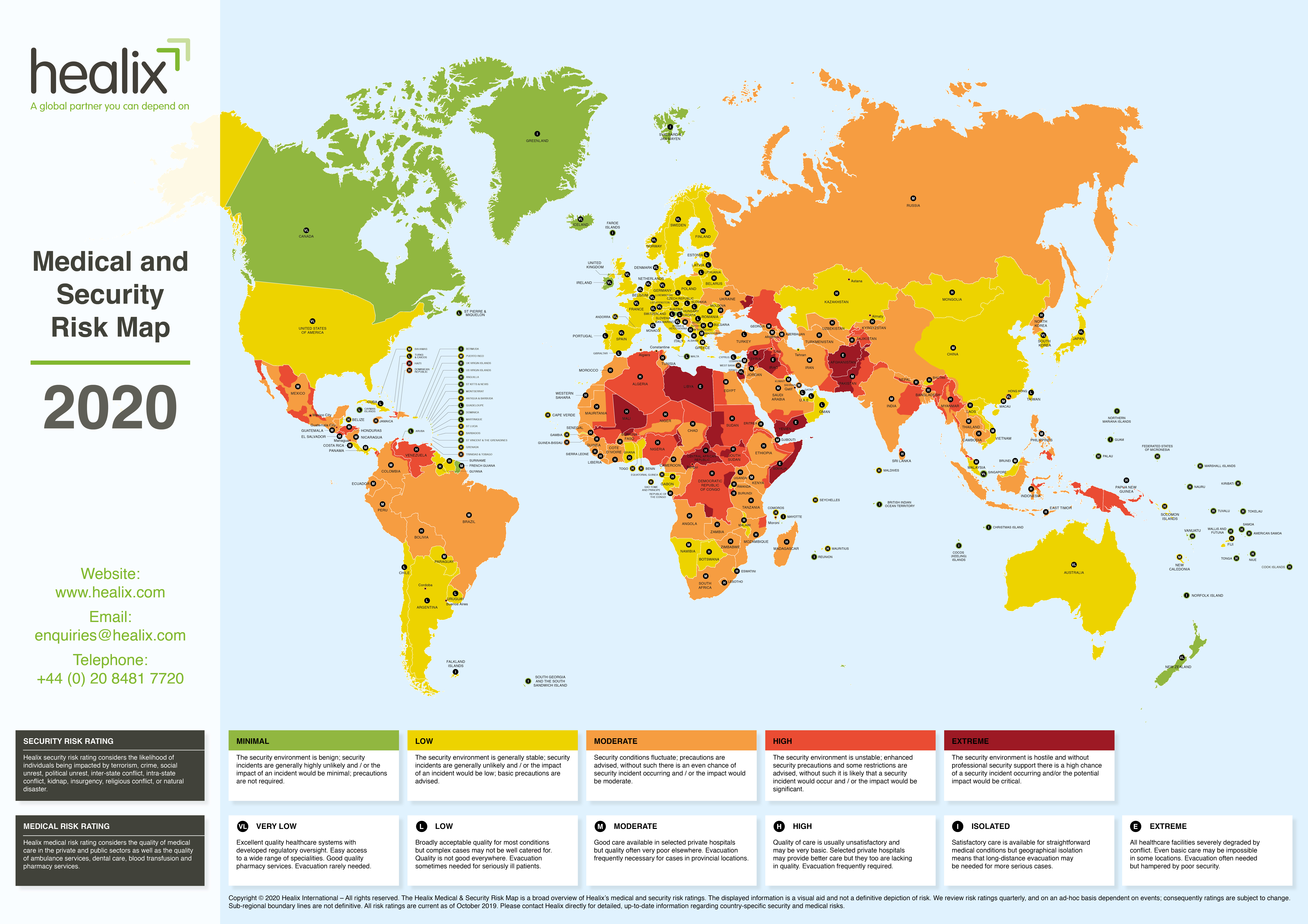 Healix raised the security risk rating for Brunei to LOW (from MINIMAL) in April following the full implementation of the Sharia penal code on 3rd April. While the authorities have declared a moratorium on the death penalty for individuals found guilty of adultery and same-sex relations, the risk of cultural and social issues persists as other parts of the full Sharia penal code are applicable to non-Muslims. The security risk rating of Taiwan was also raised in June after a scheduled review to accurately reflect the rising cross-strait tensions with mainland China. While not reflected in the latest map, the risk rating for New Zealand was raised to LOW (from MINIMAL) from March to August this year. The revision was triggered by the elevated risk of terrorism in the aftermath of the 15th March Christchurch attack, which resulted in 51 fatalities. The Islamic State (IS) militant group called for retaliatory attacks following the incident, but there has not been a major security incident reported in the country since 15th March. On 17th April, the government lowered the national security threat level to MEDIUM (from HIGH, the third-highest on a six-tier scale); this is still higher than the level prior to the attack, but the government have stated that there is ‘no current specific threat’ that agencies are responding to.

Healix raised the security risk rating for the Mexican states of Guanajuato, Chihuahua, and Colima to HIGH (from MODERATE) in June following a significant increase in crime rates. In the past year, these states have had the highest murder rates in the country, primarily due to ongoing turf wars between rival cartels. In Guanajuato, the establishment of the Santa Rosa de Lima Cartel (CSRL) over recent years and its ongoing turf war with the Jalisco New Generation Cartel (CJNG) has resulted in the state having one the highest homicide rates in the country. The government’s increased security deployments, intended to combat the rising crime rates, have triggered violent pushback from cartels, especially in Chihuahua and Colima. In recent years, Belize has increasingly become a favoured route for illegal migration from South America to the US, bolstering the presence of criminal groups exploiting migrants. This, in turn, has seen a continued rise in murder rates, violent crime and the increasing presence of armed gangs. This drove Healix to elevate the security risk rating for Belize City and Belizean border areas with Guatemala and Mexico to MODERATE (from LOW), in July.

In June, Healix raised the security risk rating for Kosovo to MODERATE (from LOW). This was driven by an increasing risk of intra-state and external conflict, particularly in northern regions. Crime rates have been steadily rising, while tensions with Serbia have led to both states increasing security deployments in border areas. Although this is most likely brinkmanship, the arrest of ethnic Serbs by the Kosovar police increased animosity further between the two states. Healix is continuing to monitor ongoing regional trends which could impact upon security risks. The rise of far-right extremism is being closely observed, as although it has not yet risen to levels which could impact upon a country-level risk rating, it is a developing trend. Politically-motivated protests in France, Russia, United Kingdom and Georgia have been closely monitored to ensure they do not elevate into larger unrest which could posed security or operational risks to foreign nationals in-country.